All kids can struggle with basic tasks, like sitting still, paying attention, and keeping from getting bored. For children with ADHD, these tasks are often much harder, and failing at them happens more frequently.

Frustrated because their brains aren’t “typical,” children with ADHD can develop poor self-esteem, depression, risk-taking behavior, or other negative traits that make it harder for them to succeed.

ADHD is more prevalent in our society than many of us realize. 9.4% of children, approximately 6.1 million, have been diagnosed with ADHD.

How Neural Circuitry Works Differently for People with ADHD

Evan Monez, an ADHD Coach who specializes in working with young people with ADHD, said people with ADHD have brains that are “wired differently than neurotypical brains. Studies have shown differences in the structure and neural circuitry of ADHD brains, in particular with how they produce and process dopamine, a neurotransmitter involved in motivation and executive functions.”

Executive functions are the things our brains do to help us execute tasks, like:

“For people with ADHD, it can be extremely difficult to access these executive functions when it comes to tasks that are not inherently rewarding or interesting.” Monez explained. This is true even if the end result of the task is something the person with ADHD wants.

Children with ADHD may want to do their chores to get a reward or avoid their parents’ disappointment. However, these tasks can seem impossible to start because chores are boring. Children with ADHD might not be able to transition into chores, because what they’re actively doing is engaging.

For example, let’s say you tell your child they should clean their room. Your child believes they should be able to just do a task, but their brain is not capable of just doing the task. They are not given an explanation or tools to help them understand and work with that challenge, and may begin to internalize negative perceptions.

“Emotions are also a big component of motivation,” Monez stated. “That negative self-perception can create further blocks to functioning and further stress.”

Game-based cognitive training is exactly what it sounds like: playing a game. However, you’re using your brain to take actions, not your fingers. To advance in the game, you have to produce the right kind of brain activity.

In game-based cognitive training, the correct brain activity involves producing electrical signals, or brain waves, that pulse at roughly 15-40 cycles per second (Hz). These are known as beta waves, and we produce them when we focus on something. This is comparable to staying focused, listening, paying attention—activities that are difficult if you have ADHD.

When we lose focus, struggle to find the right word, or graze over a paragraph and have no idea what we just read, our brains are pulsing at 4-8 Hz. When our brains move at this pace, they’re producing theta waves.

Children with ADHD often produce more periods of theta waves than beta waves. Game-based cognitive training sessions help reverse that ratio, increasing the time your brain focuses on problem solving and processing information, instead of when you’re zoning out.

While effective, game-based cognitive training has a few drawbacks. This type of training can take 45 sessions or more, averaging around $100-$125 per session. Also, each session takes between 30-60 minutes, depending on sensor placement, adjustments, and breaks. Children with ADHD may find it difficult to sit still for that amount of time.

As with many treatments, there are times when a child will make great strides forward, and stretches where they may make little to no progress at all.

Your child’s neurofeedback practitioner needs to be their cheerleader, teacher, coach, and shoulder to cry on all at once. They have to emphasize positive reinforcement, train them to understand brain waves and how neurofeedback works, and be copacetic when it doesn’t.

Passive neurofeedback is an easier, more affordable option. It also has a high success rate.

Passive neurofeedback monitors your child’s electromagnetic patterns. Then, it sends the information back to them in real time, allowing it to self-correct. It uses neuroplasticity, which is the brain’s ability to reorganize itself and form new connections.

Each session is 30 minutes long, but the treatment itself takes between a few seconds and a minute. It doesn’t require you to focus or learn anything specific, making it perfect for children with ADHD.

Treatments are also incredibly safe. During a session, your brain is exposed to very low frequency waves that stimulate healthy change.

At NeuroLogic Seattle, we specialize in treating children and adolescents with ADHD. We emphasize compassion and empowerment, especially when it comes to kids.

Schedule a visit today, or sign up for a free consultation to see if neurofeedback is right for you.

The 6 Pillars of Brain Health 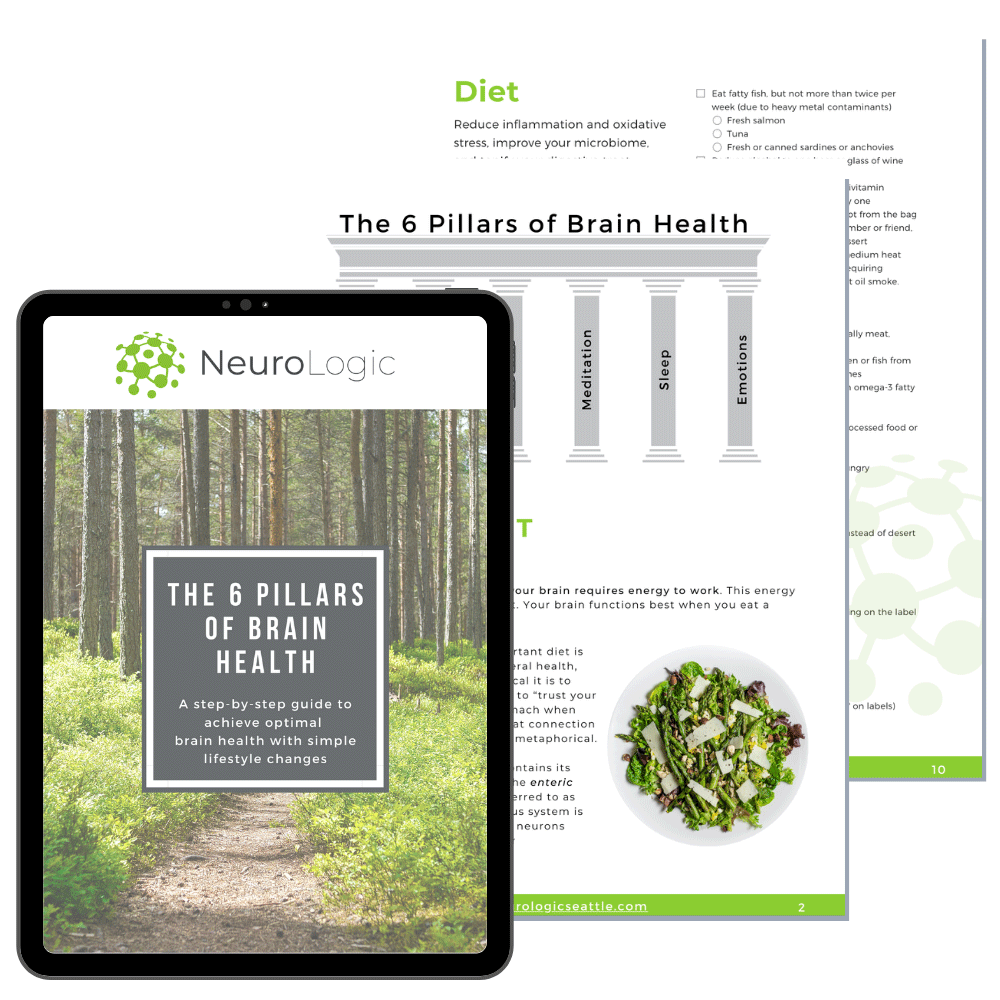